Portsmouth High School hosted its first ever virtual online House Music competition this week to the whole school community. One hundred and fifty-seven entries were whittled down to twenty-eight finalists who sang songs from Sister Act to I Dreamed a Dream from Les Misérables and performed pieces on instruments including piano, cello, ukulele, flute and clarinet from Butterfly Waltz by Brian Crane to Aria by Eugène Bozza.

The girls performed from their bedrooms, bathrooms and gardens and the finalists’ entries were compiled into an hour and a half film by Director of Music, Mr George Tinsley. The guest judge, Wicked Star, Laura Pick, sang from her sitting room, On My Own from Les Misérables which was both moving and exhilarating for the audience. She then announced the final four places from her home.

In fourth place was the Year 7 choir, made up of all the houses – Austen, Bronte, Eliot and Gaskell – singing Memories. In third place was Charlotte from Bronte, singing Sister Act and in second place was Hannah for Gaskell who performed Liebesträume Nr 3 – Dur, by Franz Liszt. The winner of the competition was Annabel for Eliot who performed Tico-Tico no Fubá by Zequinha de Abreu on the clarinet.

‘You are all stars,’ said Laura Pick. ‘You are all winners in my eyes. Thank you for a wonderful afternoon’s entertainment.’

Director of Music, Mr George Tinsley, who orchestrated the event, carried out auditions, edited the footage and compèred the afternoon said:

‘In April, I just couldn’t see how we could produce a House Music Competition that would have the same electrifying feel of the live version that rounds off every academic year. Then the entries started pouring in. Our pupils produced beautiful, inspiring work that rivals anything heard on stage. Choosing finalists from among the 157 entries was a tough job but the really hard task of selecting winners was left to West End star Laura Pick, who quite rightly stated that ‘You are all winners’. I am still reeling from the magnitude of what the girls achieved. It proves that our community can accomplish truly great things, whatever the circumstances.’

The winner of the competition, Annabel, added:

‘I was so surprised to have won, especially as the competition was so strong. Thank you so much to the very talented Laura Pick for judging the competition. Mrs Morris, Mr Tinsley and Mrs Flatman have been wonderful and their support has helped me develop as a musician.’

The House that won overall was Bronte and was ‘virtually’ presented with their cup by Headmistress, Mrs Prescott.

The highlights of the afternoon are here: here

Year 11 girls at Portsmouth High School celebrated the end of their spring online assessment period with a virtual ‘Aspire Day’ which, this year, included...

Year 9 spent an afternoon biology lesson investigating osmosis. In the laboratory students would use potato tissue, sucrose solutions, scientific balances, and an array of...

During Guided Home Learning Year 8 scientists were asked to produce a lesson resource to teach other students of their own age about ‘Atoms in a... 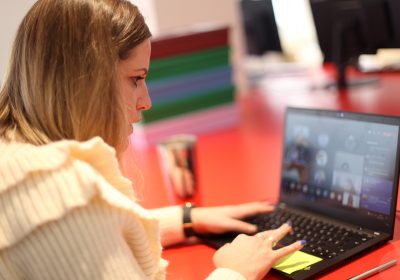 English teacher Mrs Wood looks at ‘Lessons from Lockdown’ with her Year 7 class online. This week, all Key Stage 3 English classes will begin...